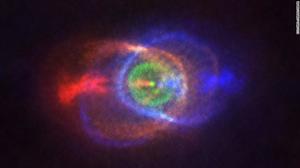 The galaxy, XMM-2599, existed 12 billion years ago. It rapidly formed a bunch of stars and died, according to data and measurements astronomers took using the W. M. Keck Observatory's Multi-Object Spectrograph for Infrared Exploration. The observatory is near the summit of the dormant Mauna Kea volcano in Hawaii.

"Even before the universe was 2 billion years old, XMM-2599 had already formed a mass of more than 300 billion suns, making it an ultramassive galaxy," said Benjamin Forrest, lead study author and postdoctoral researcher in the University of California, Riverside's Department of Physics and Astronomy.

The study published Wednesday in the Astrophysical Journal. 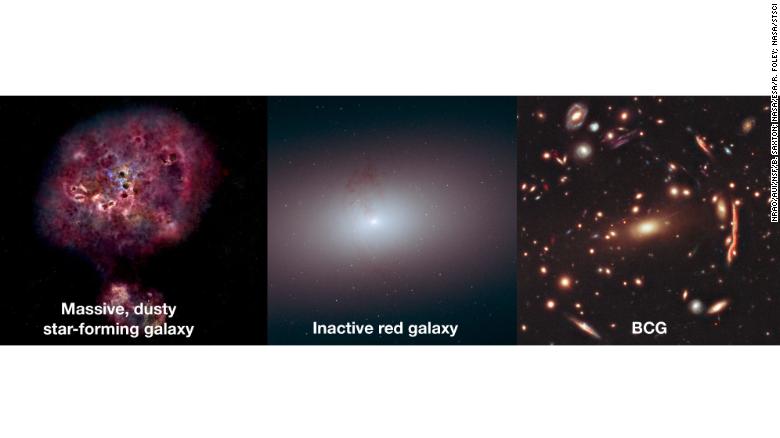 The possible evolution of an unusual monster galaxy is shown from left to right, from its beginning as a massive galaxy bursting with star formation, transitioning to a dead galaxy and perhaps its eventual fate: becoming a bright cluster galaxy.

During its heyday, the galaxy was able to create more than 1,000 solar masses of stars in a year. That's an incredibly high rate of star formation when contrasted with our own galaxy, the Milky Way, and its one new star per year.

"XMM-2599 may be a descendant of a population of high star-forming, dusty galaxies in the very early universe that new infrared telescopes have recently discovered," said Danilo Marchesini, study co-author and an associate professor of astronomy at Tufts University in Massachusetts.

But astronomers are unsure of how the giant galaxy evolved. It's unusual when compared to other known galaxies in size. And based on their models, XMM-2599 should still be forming stars.

"What makes XMM-2599 so interesting, unusual and surprising is that it is no longer forming stars, perhaps because it stopped getting fuel or its black hole began to turn on," said Gillian Wilson, a professor of physics and astronomy at the University of California, Riverside. Forrest works in her lab.

"Our results call for changes in how models turn off star formation in early galaxies. We have caught XMM-2599 in its inactive phase."

The galaxy can't lose mass, it's just not forming stars anymore, so astronomers wonder what will become of it.

"As time goes by, could it gravitationally attract nearby star-forming galaxies and become a bright city of galaxies?" Wilson hypothesized.

The astronomers have been granted more time at the observatory to continue studying the strange galaxy and hopefully discover answers to their questions.

"Perhaps during the following 11.7 billion years of cosmic history, XMM-2599 will become the central member of one of the brightest and most massive clusters of galaxies in the local universe," said Michael Cooper, study co-author at the University of California, Irvine.

"Alternatively, it could continue to exist in isolation. Or we could have a scenario that lies between these two outcomes."