Do Spider-Man, Superman break the laws of physics?

Noah Hinojos, left, and Andrew Barabas give a demonstration during UCI???s annual physics show and lecture for K-12 students. The event was hosted by the School of Physical Sciences on Saturday, Feb.1, 2020.

Superman would have known that momentum equals mass times velocity and that Newton’s third law of physics states every action has an equal and opposite reaction.

Superman, Spider-Man, Flash, Captain America and the rest of the Marvel and DC superheroes could have learned what the hundreds of children and adults learned by attending “Adventures in Physics: How Physics Makes Superheroes Super.” 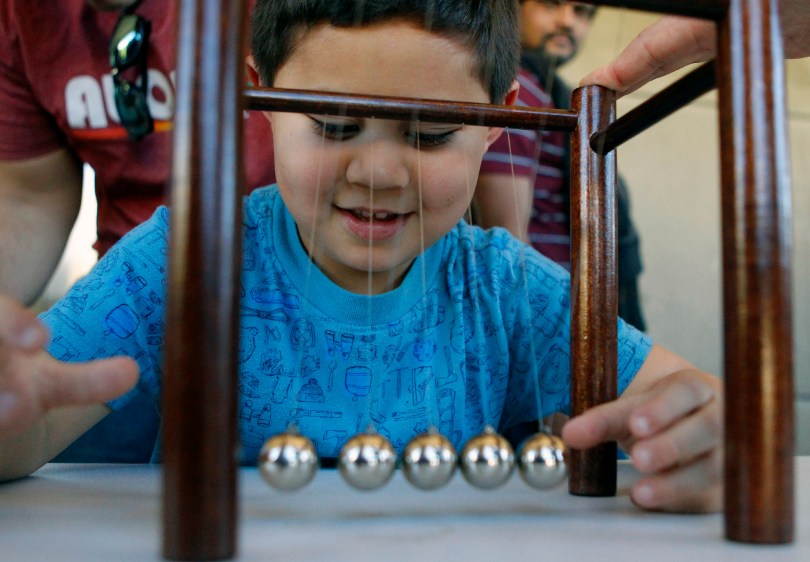 Keoni Vogelsang, 5, of Long Beach gets a hands on demonstration of “Newtons Cradle” during UCI???s annual physics show and lecture for K-12 students. The event was hosted by the School of Physical Sciences on Saturday, Feb.1, 2020. (Photos by Karen Tapia, Contributing Photographer)

The event, held Saturday, Feb. 1 in the Physical Sciences Lecture Hall on the UC Irvine campus, examined the physics behind super powers such as flying, along with other powers exhibited by the most popular superheroes of our time.

“The force of Lois Lane is actually less if she just hits the ground then if Superman catches her, unless he catches her in a very specific way,” said Michael Dennin, professor of physics and astronomy at UC Irvine and one of the presenters Saturday. “The cool thing about superheroes when it comes to physics is some of what they do is consistent with the law of physics and some of what they do is not.”

Physics Professor Bill Heidbrink and three of his students got the day started by demonstrating concepts involving Sir Isaac Newton’s laws and momentum. The audience watched rockets launch and objects collide as they learned about mass, velocity and conservation of momentum.

“We teach about momentum in simplified terms,” said third-year physics major Noah Hinojos. “I think opening them to the world of physics and science is really useful. Science is really interesting.”

While superheroes such as Spider-Man and Superman can teach the world a lot about physics, the superheroes also defy the laws of physics, Dennin said.

In the first Superman movie with Christopher Reeve, there is a scene in which Superman flies around the Earth and spins the planet backward, therefore making time go backward.

“That’s just not going to happen,” the professor said.

Speaking about Newton’s third law, Dennin pointed out that superheroes are often seen applying force to an object without any apparent force back on them.

“We don’t necessarily process that as incorrect when we watch the movie,” he said. “It’s kind of subtle but that is an important law of physics that is often violated.”

Dennin is a panelist on the podcast “Fascinating Gadgets, Gizmos, and Gear-Based Technologies” and for the YouTube channel “Fascinating Fights,” a series in which superheroes and other pop-culture icons are pitted against each other in battle.

Using physics, the battles are analyzed and a winner is determined.

“Marvel and DC, with the movies, have made my life incredibly easy because you actually have a visual of motion and physics is all about motion,” Dennin said. “It’s just a great realm to engage people to think about physics.”