The Amazon is a key buffer against climate change. A new study warns wildfires could decimate it

A photo from Brazil in August 2019 shows one of the many fires that scorched the Amazon last year.
Drew Kann
CNN

In 2019, record fires in the Amazon sparked international outrage and capped a decade that saw the rainforest lose an area the size of 8.4 million soccer fields to deforestation.

But authors of a new study warn that as the climate becomes hotter and drier, future fires could be far more damaging.
They project that the amount of forest burned could double by 2050 and consume 16 percent of the rainforest -- an area nearly the size of the entire state of Michigan, according to Paulo Brando, a professor at the University of California-Irvine and a lead author of the study.
When the rainforest is healthy, its trees and plants pull billions of tons of heat-trapping carbon dioxide from the atmosphere each year, and it is one of the planet's best defenses against climate change.
But fires could imperil its ability to fight climate change, the study found, to the point that the forest actually could begin contributing more planet-warming gases to the air than it absorbs by 2050 -- or sooner.
The findings were published Friday in the journal Science Advances, and add to the growing evidence showing that human activity risks irreversibly changing the rainforest -- and in turn, the planet.
It is also a stark warning that without action to protect the forest from wildfires, one of the world's best buffers against further climate change is in danger of crumbling.
It's hard to overstate how important the rainforest is to the global climate, and how much of an impact its destruction could have.
Through photosynthesis, the plants and trees of the Amazon absorb billions of tons of carbon dioxide from the air each year, which helps limit how much of the heat-trapping gas is in the atmosphere.
And its vast tree canopy serves as an "air conditioner" for the planet, scientists say, influencing global temperature and rainfall patterns.
"If we were to release all of the carbon [in the Amazon] at once, that would be the equivalent of sending about 10 years of human carbon emissions into the atmosphere, so it's a huge carbon sink," Brando said. "And if you leave forests alone, they can actually accumulate carbon over time, and that's extremely important." 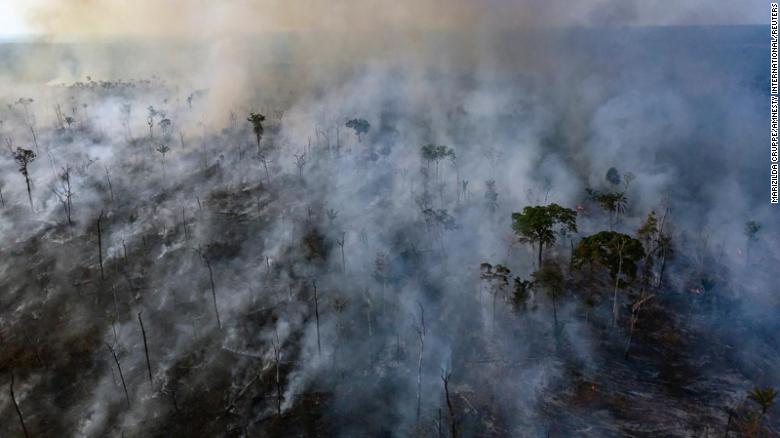 An aerial view of a forest fire of the Amazon taken with a drone is seen from an indigenous territory
in the state of Mato Grosso, Brazil, in August 2019.

If the fires of last year showed anything, it's that protecting this enormous forest will be challenging.
As bad as last year was for the Amazon, Brando warns that as the forest dries and warms, things could get much worse if policies to fight deforestation are not implemented.
"Last year, people saw that as a disaster." he said. "But if we had a drought then, things could have been much worse."
The study found that due to changes that have already been set in motion by human emissions of greenhouse gases, wildfires are likely to increase in the Amazon no matter what.
But there is some hope.
Deforestation for logging, mining and clearing land for crops and livestock fragments the forest, the authors say, making it more susceptible to catching fire on its edges.
But preventing new deforestation, the report found, could cut carbon emissions from future fires in half and prevent the blazes from spreading into protected areas.
"[The report] is a warning that we should not be surprised if we get a major firestorm pretty soon," Brando said. "But we have the tools to reduce that likelihood by reducing deforestation."
Original Source