Virginia Trimble, winner of the 2019 Andrew Gemant Award from the American Institute of Physics

Trimble is a professor in the department of physics and astronomy at the University of California, Irvine, is a staff astronomer and member of the advisory board for the Las Cumbres Observatory in Goleta, California, and holds an honorary staff position at the Queen Jadwinga Observatory in Rzepiennik Biskupi, Poland. She has published more than 900 works in astronomy, astrophysics, science history and scientometrics and, for many years, wrote a popular yearly review of astronomy and astrophysics research for the Publications of the Astronomical Society of the Pacific, according to UCI.

The Gemant Award recognizes Trimble’s lifelong successes in the physical sciences and “for taking the broader view of how physics and astronomy is accomplished, creatively engaging physical scientists and the public throughout her lifetime, and commitment to establishing science within the social perspective.” The award includes a cash prize of $5,000 and a grant of $3,000 to further the public communication of physics at an institution of Trimble’s choice.

“We are extremely honored to present Virginia Trimble with this year’s Gemant award,” said AIP CEO Michael Moloney. “Dr. Trimble has devoted much of her life to exploring the historical and cultural side of physics and astrophysics. Her knowledge and professionalism are highly regarded in the international science community, and she is a most deserving recipient of this award.”

“I am deeply honored and grateful to be a recipient of the Gemant award,” Trimble said. “More specifically, I am deeply grateful to the colleagues who took the trouble to organize the nomination, which is by no means a trivial task.

“If I am remembered by the time of my 100th birthday, it will be for the Life Magazine article, my year as Miss Twilight Zone, posing for Richard Feynman when he was learning to draw, and the Andrew Gemant Award.”

Her nomination and selection as the recipient of the Gemant Award looked at Trimble’s career as an advocate of the history of physics to students, colleagues and the general public, and her work in the arts and humanities that evolved from her love and knowledge of physics.

The nomination committee noted Trimble’s integral and lifelong achievements toward public enlightenment about astronomy, astrophysics and other sciences in her writings, her work at as editor to broaden the world awareness of scientific achievements for generations of people, and her efforts to champion the social perspective of science by understanding how people relate to the sciences.

The committee did not pinpoint one single achievement in granting this award, but they chose Trimble for the depth and breadth of her works that, for decades, inspired scientists, piqued the curiosities of people, and permeated the world science psyche.

“I have had the great pleasure of knowing Virginia for many years. Her passion about sharing the world of physics with others is an inspiration,” said David Helfand, astrophysicist and chair of the board of directors for AIP. “She is indefatigable when it comes to helping others, always looking to share her knowledge with younger researchers and pointing them in directions they may not have considered. I am delighted she has been chosen as the recipient of the 2019 Andrew Gemant Award.”

In her quest to broaden the relevancy of physics and astrophysics, Trimble is currently working on several book chapters and speeches on the history of science as it relates to various discoveries. During an oral history recorded for AIP, David DeVorkin, the host of the oral history talk, said Trimble’s ability to review the state of physics in other fields is impressive.

“She is very creative. She is working on a talk for the American Chemical Society about the periodic table and regarding the women who discovered elements,” said DeVorkin, senior curator of history of astronomy at the National Air & Space Museum of the Smithsonian Institution. 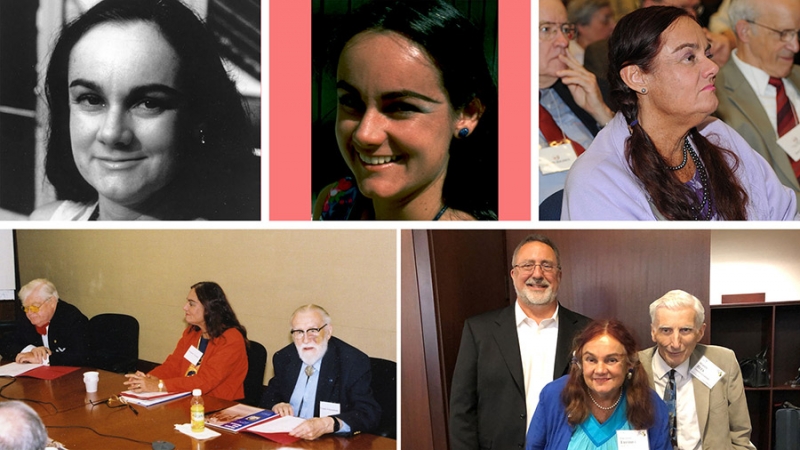 While Trimble’s widely popular work in astrophysics and astronomy is well known, her time at UCLA as an undergraduate student opened her world to many other disciplines, including linguistics, paleontology, archaeology (especially Egyptology) and several other fields. It gave her a unique insight into how the science of the stars related to many moments in history, and her writing often draws connections between scientific ideas and ideas from literature and the arts.

“Much of my recent work has been in history of science,” she said. “Many historians of physics and astronomy were trained as historians. Others of us are aging astrophysicists, etc., who find that things we remember as ‘current events’ are now regarded as ‘history’ (discovery of quasars, pulsars, the microwave background). The two communities are surprisingly different in ways of writing and speaking of their work and in choosing what to emphasize.”

DeVorkin, a college friend of Trimble’s, said her methods, even at UCLA, showed her drive to go beyond the basics in physics.

“Virginia was very intuitive of what was going on and what was important,” he said. “She has a clarity and is intense. She is an amazing spokesperson by example.”

Part of her current drive comes from what she feels is the most pressing issue facing physics and other sciences -- “the intellectual and emotional disconnect between us and the voters, taxpayers, students and all for whom our work is meant to be beneficial.

“We need to learn how to ‘start from where they are’ on vaccines, climate change, genetic modifications of crops, production of high-grade energy,” Trimble said. “Just saying ‘science has shown’ or ‘the evidence proves’ is not a winning strategy. But I'm not quite sure what the starting point is. I feel it should be something along the lines that we all want a decent life for ourselves and our children but also for all other human beings.”

Trimble will be presented with the award on Thursday, Oct. 3, at an event for the Lyne Starling Trimble Science Heritage Public Lecture Series at Caltech. Funded by a generous donation from Virginia Trimble, the lecture series is named after her late father, Lyne Starling Trimble, who held patents for a number of color-reproduction systems and was an innovative chemist. More information about the Gemant Award can be found at https://www.aip.org/aip/awards/gemant-award.

Virginia Trimble is a native Californian and graduate of Hollywood High School, UCLA, the California Institute of Technology with a doctorate in astronomy in 1968, an honorary master’s degree from Cambridge (U.K.) and a doctor honoris causa from the University of Valencia (Spain). Her early research included measuring the masses of white dwarf stars from their Einstein, relativistic redshifts, determining the distance and energetics of the Crab Nebula supernova remnant, calculating the details of evolution of stars with unusual chemical compositions, and exploring the statistics of orbits of close binary pairs of stars. Later, she transitioned into looking at the productivity and impact of large telescopes, gauging the influence of institutional backgrounds on astronomical success, and attempting to estimate the success rates of the astronomical decadal surveys of priorities for the field. Trimble has reached the age where many of the discoveries she remembers as "current events” (quasars, pulsars, the microwave background radiation) count as history and has written a good deal in that territory, especially history of dark matter. Sixteen years of reading all the papers in 23 journals and summarizing them annually eventually collapsed under increasing numbers and decreasing availability of paper copies. She has been part of the governance structures of the American Physical Society, the American Astronomical Society, the International Astronomical Union, the International Union of Pure and Applied Physics, and a few others. She secretly enjoys committee meetings, has a publication list exceeding 900 items, and is a professor of physics and astronomy at the University of California, Irvine (the oldest member of the department still on full active duty), after 28 years of sharing appointments between UCI and the University of Maryland with her husband, Joseph Weber, designer and builder of the first detectors for gravitational waves. Trimble's recent teaching includes the physics of music and the impact of World War I on the sciences, the intended topic of her Andrew Gemant lecture in October 2019.

The Andrew Gemant Award recognizes the accomplishments of a person who has made significant contributions to the cultural, artistic, or humanistic dimension of physics and is given annually. The award is made possible by a bequest of Andrew Gemant to the American Institute of Physics. The awardee receives a $5,000 cash award, designates an academic institution to receive a grant of $3,000 to further the public communication of physics, and is invited to deliver a public lecture in a suitable forum.

ABOUT THE AMERICAN INSTITUTE OF PHYSICS

The American Institute of Physics is a federation of scientific societies in the physical sciences, representing scientists, engineers, educators, and students. AIP offers authoritative information, services, and expertise in physics education and student programs, science communication, government relations, career services, statistical research in physics employment and education, industrial outreach, and the history of the physical sciences. AIP publishes Physics Today, the most closely followed magazine of the physical sciences community, and is also home to the Society of Physics Students and the Niels Bohr Library and Archives. AIP owns AIP Publishing LLC, a scholarly publisher in the physical and related sciences. www.aip.org